Andrew Whitworth is a retired professional football player from the United States with a net worth of $47 million. He was an offensive tackle with the National Football League’s Los Angeles Rams (NFL). He was drafted in the second round of the 2006 NFL Draft by the Cincinnati Bengals after playing college football at LSU, where he twice earned first-team All-SEC honors.

He is the NFL’s oldest tackle and the oldest offensive lineman to win a Super Bowl, and his long career is well-known. The footballer has amassed a sizable fortune from prize money, endorsements, and collaborations. As a result of his outstanding performance in the championship, he appears to be on his way to becoming one of the highest-paid football players in the league. 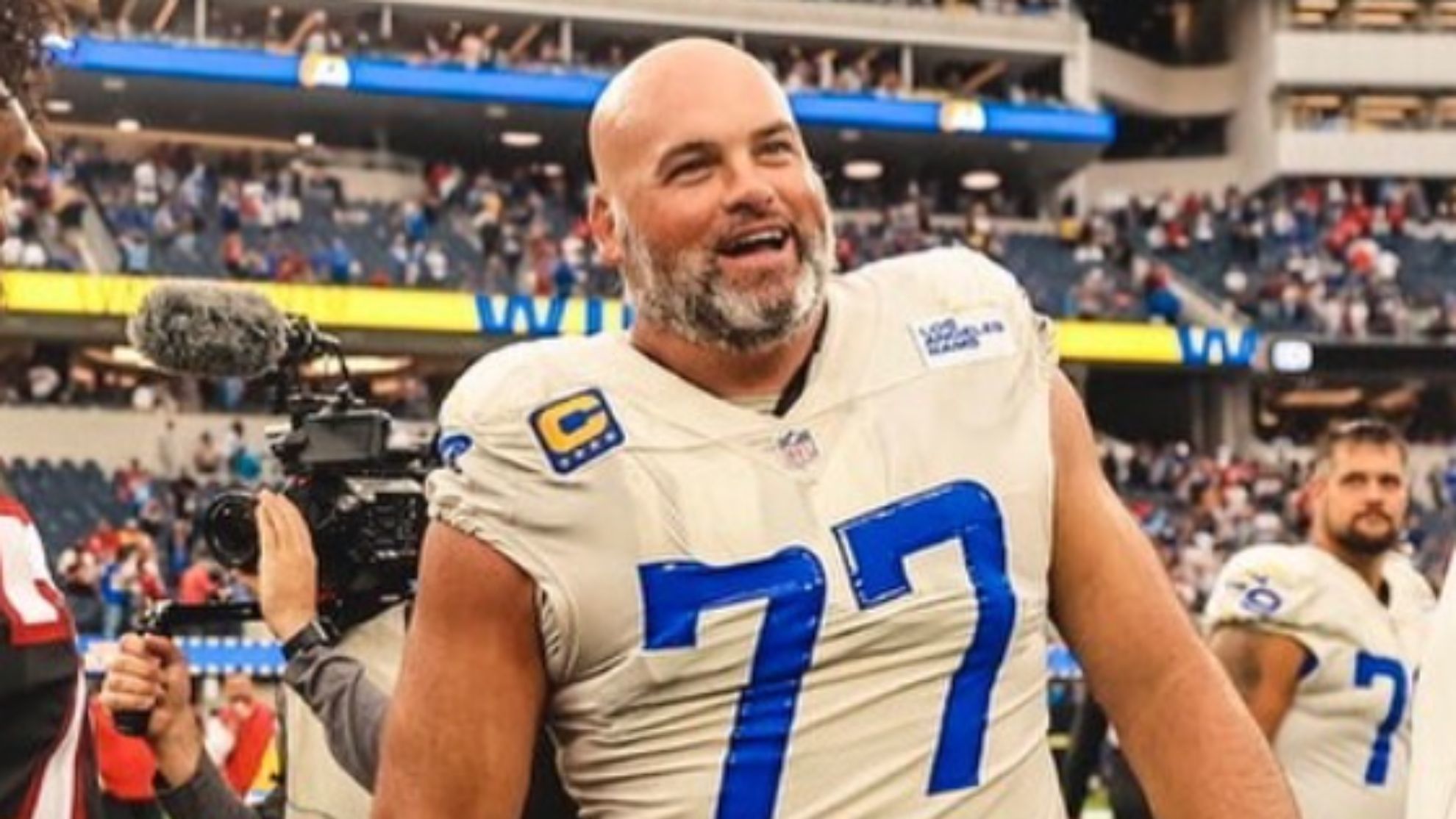 Andrew James Whitworth was born in the year 1981 on the 12th of December. He grew up in Monroe, Louisiana, and graduated from West Monroe High School. Don Shows coached his high school football team, the Rebels, and he used to play for them. He obtained his diploma in 2001. He was a member of two Louisiana Class 5AProfessional Career teams from 1998 to 2000.
Andrew began playing football for the Rebels in high school under Don Shows and stayed with them through graduation.

After starting every game as a redshirt freshman in 2002, he was named a first-team Freshman All-American. During the 2003 season, he started all 14 games, logging 1,008 snaps and 105 crucial blocks, including 82 knockdowns.

With 52 consecutive starts from 2002 to 2005, he finished second in NCAA Division I. He was also named to the Southeastern Conference’s first team in each of his final two seasons, as well as a majority pick as a senior.

In 2006, he signed with the Cincinnati Bengals and made his special teams debut the following year in Kansas City. Whitworth made his second start at left guard against the Browns, helping the Bengals to a 481-yard total offense. As a result, he started every game this season.

Whitworth’s position was switched from left guard to left tackle in 2008, and it had an immediate impact on the games. Whitworth was chosen to the AFC Pro Bowl as a left tackle for the first time in his career in 2013. After departing the Cincinnati Bengals in 2017, Whitworth joined the Los Angeles Rams. In his rookie season with the Rams, Whitworth was named to his fourth Pro Bowl. On the NFL Top 100 Players of 2018, his colleagues ranked him 87th. In 2020, Whitworth signed a three-year contract with the Rams.

Whitworth was named the 2021 Walter Payton NFL Man of the Year at the 11th Annual NFL Honors. Whitworth earned his first Super Bowl for what would inevitably be his final match after the Rams defeated his previous team, the Cincinnati Bengals, 23–20 in Super Bowl LVI.

After 16 seasons with the squad, Whitworth announced his retirement in 2022. Teams that have won the state championship.

He was a member of four consecutive district championship teams in one of the hardest districts later in his career. He was also a tennis champion in Louisiana and later a terrific golfer. Andrew participated in the US Army All-American Bowl in 2000, along with a number of other players.

Andrew Whitworth is married to Melissa Whitworth, the 2003 Miss Louisiana, an award-winning Louisiana reporter, and the winner of Cincinnati’s version of Dancing With the Stars. They’ve been dating for a long time. Their four children include Sarah and Drew, Michael, and Katherine, the couple’s twins.

The athlete sustained a torn MCL and a torn PCL in the year 2020. He was forced to skip the match due to his ailment and the need to properly recover.

Andrew Whitworth has founded the “BigWhit77 Foundation,” which is a non-profit organization.

Andrew and Melissa Whitworth, as well as a variety of communities, sponsors, and private donations, are funding the effort. This organization’s main goal is to improve the quality of life for teenagers and their families in the neighborhood.

He and his wife also contributed $50,000 to a black-owned small business in Inglewood, California, that was fighting to stay afloat during the pandemic.

Andrew Whitworth is a Westlake Village, California resident. Choudrant LA lived in his home, which he sold for a high yet reasonable price. Andrew moved into a $6,050,000 estate that spans 10,090 square feet and sits on nearly an acre of land. The property features seven bedrooms and 7.5 bathrooms, as well as a pool and a basketball court in the backyard, making it ideal for him and his family to unwind. In 2018, a local entrepreneur paid $4 million for the property, but within four months, she was able to sell it for $5.3 million to a local builder.

The estate was later refurbished by a local developer before being sold for $6 million to Andrew Whitworth. The house has seven bedrooms, eight bathrooms, and an additional guest room.

According to the listing, the house boasts a great room with a fireplace, as well as an upstairs “entertainment loft” with plenty of space for movie and gaming nights.

The estate is bordered by large hedgerows for privacy from neighbors. Among their neighbors are Britney Spears, Kaley Cuoco, Jamie Foxx, Tom Selleck, and WWE’s The Miz.

This right here is the problem with YOUTH sports. Get it together folks. The chances your kid is making it is about .00004%. My husband was an Umpire. He still remembers the names & faces of the parents who yelled at him…. Remember that. We all should. https://t.co/lPojV0cse4

Andrew Whitworth has announced his retirement from the NFL after 16 seasons. “My chapter on the field may have ended, but my tale isn’t over yet.” “I’m looking forward to the next one,” Whitworth wrote. “I’d like to express my gratitude to everyone who has been a part of my journey!”

After 16 Seasons in the NFL, He Announced His Retirement.

“My chapter on the field may have ended, but my tale isn’t over yet.” “I’m looking forward to the next one,” Whitworth wrote. “Thank you to everyone who has helped me along the way!”

Whitworth was a cornerstone left tackle for the Cincinnati Bengals for his first 11 seasons after being drafted in the second round out of LSU in 2006. In 2017, he relocated to Los Angeles as part of the Rams’ revolutionary offseason.

Whitworth remains one of the best-left tackles in the NFL at the age of 40. He had the ability to maul edge rushers while still being aware of speedier, younger guys.

Whitworth’s career comes to a close with the Rams’ victory in Super Bowl LVI.

In his illustrious career, the 2021 Walter Payton NFL Man of the Year was selected to four Pro Bowls and two first-team All-Pro awards.

With a Projected Net Worth of $1.2 Billion by 2022, How Much Money Did John Gotti Jr Make?

What Was Traci Braxton’s Net Worth at the Time? It’s a Dream Come True: She Reached It Before She Died

Previous articleKit Clementine Keenan Salary and Earnings in 2022: What Exactly Is Kit Keenan’s Net Worth?
Next articleApproximately How Much Money Does R Kelly Have in His Bank Account? (Updated March 2022)